Are There Exceptions to Florida’s No Fault Divorce Policy?

Florida is a no fault divorce state, meaning that either party can seek a divorce without having to prove any reason or fault in the marriage other than the fact that the spouses don’t want to be married anymore. This rule relieves the court from having to decide whose fault the broken marriage is and alleviates the spouses from having to talk about painful and personal issues in court. Adultery is one exception that can have an impact on the divorce and the result of child custody, property division and alimony decisions.

Adultery is the exception to Florida’s no fault divorce 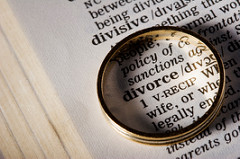 Effects of adultery on child custody
Adultery can affect how child custody is arranged because when the court considers this aspect, they take moral fitness into consideration. If one parent can prove that the other’s adultery is likely to have a negative impact on their child, the judge might limit that parent’s custody or visitation.

Effects of adultery on property division
Adultery can also affect how marital property or debt is divided. If one spouse can prove that the other used their money on their non-marital partner on things like gifts, trips, apartment rent, car payments, and dinners, that can be considered a waste of marital assets. Then the court may reduce the adulterer’s share of marital assets to compensate the other spouse.

Effects of adultery on alimony
In Florida, adultery is a factor that is considered when determining alimony, but courts struggle to pair adultery with the no fault concept. When a judge makes this decision, they usually only increase a wronged spouse’s alimony if the adulterous spouse’s non-marital relationship increased the wronged spouse’s monetary needs.