Should I Have a Postnup or a Prenup?

Although many would love to believe their marriage will last forever, the unfortunate reality is that 44% of marriages end in divorce. Even if you don’t plan to be included in that 44%, it may be wise to plan for the worst, especially if you or your spouse have a lot of assets that need protection. If you are looking into getting a prenup or post nuptial agreement, it is advisable you go into the process knowing which one fits your situation most.

What Are the Differences Between a Prenup and a Postnup? 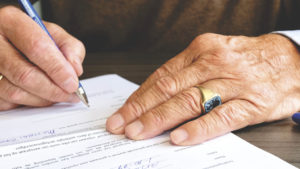 A prenuptial agreement is an agreement (contract) that is made between the spouses before the marriage takes place. The agreement states clearly how assets will be divided if the marriage does come to an end, which include assets both spouses entered the marriage with, assets they accumulated during the marriage, and the estate. Additionally, prenups can be agreements determining other things such as who is to keep the family pet after the marriage ends and who, if anyone, will be awarded alimony and the amount of alimony.

The only thing that a prenup does not control is asset division in regards to the children, which include children the spouses had before the marriage.

The simple difference in a postnuptial agreement is that it is created during the marriage, after the couple has said their vows. While a prenuptial agreement will protect all the assets the individuals walked into the marriage with, a postnuptial agreement’s asset protection is more limited. This is because without a prenup agreement, everything the couple acquired after saying “I do” becomes marital assets that are eligible for equitable distribution. A postnup’s purpose is to determine how those assets will be divided. It is usually not as clean and clear-cut as if a prenup was made. A prenup usually offers more security if you have entered the marriage with your own assets.

Which Do I Need?

In general, married couples only need either a prenup or postnup when they have a large amount of assets. If a couple has little to no major assets, they don’t usually need to concern themselves with either agreement. If you have strong individual assets before the time you make your vows, a prenuptial agreement is probably the best option for you. However, if you did not have the time or knowledge to create a prenuptial agreement before saying “I do,” it may be best to go about creating a postnuptial agreement with your spouse, so you can still have a predetermined way to divvy up marital assets.

It is not advisable to go through either of these agreements alone. Each spouse, ideally, would have their own attorney representing them while creating the agreements. Then, a neutral, third-party attorney would review the agreements to make sure assets would be divided as they should. Having an attorney would help you and your spouse determine if your potential or current marriage would benefit from either agreement, and if so, which agreement would suit your needs best.