Time Sharing of Children Requires Sticking to the Plan 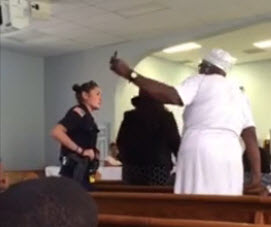 Watch and learn, as a Pensacola police officer enters a church service in process, to complete a custody order to return a 13-year old child to the custody of her father. Worshipers, upset at the intrusion, recorded the event in a video that went viral and garnered hundreds of comments critical of the officer. (Naturally, on the internet, commenters pile on their opinions, with no understanding or interest in what actually happened.)

The father of the child went to local police to enforce the return of his daughter, who was with grandparents at their home in Escambia County, but to no avail. Knowing, apparently, that they would bring her to church in Pensacola, the father then went to the Pensacola police department with the same request. This time, an officer took the father with her to the church, and went inside to effect the transfer of the girl to her father. The grandparents stalled, but eventually the child was returned to her father.

The Police Chief in Pensacola defends the peaceful, but direct way in which his officer carried out this exchange. Outraged church members made references to “the sanctity of a worship service” while ignoring the fundamental issue: the grandparents had held the girl beyond the time assigned to them by the court, which then required the father to enlist the help of the police to enforce.

“It could have been handled differently” is an observation that applies to the grandparents, first and foremost.  From watching the video, it does not appear that this is a case where the officer on the scene did anything that  If you don’t want to cause a scene involving the police, then don’t attempt to overstay your custody arrangements.  While there are undoubtedly many valid lessons to be learned from this episode, one simple lesson stands out:  respect the terms of your custody arrangement.